July 10: 2B/DH Robinson Canó traded to Braves
Canó was traded to Atlanta for cash considerations. The 39-year-old was playing for Triple-A El Paso, where he batted .333 with an .854 OPS in 21 games. He had an earlier 12-game stint with the Padres but was 3-for-33 with no extra-base hits.

The Padres took a flier on Canó after he was released by the Mets in May. New York remains responsible for the bulk of the veteran’s $23.4 million salary for this season and $24 million for next. -- Shaun O’Neill

June 10: Padres sign Canó to Minors dealWithout room on their big league roster, the Padres designated Robinson Canó for assignment last week with hopes they could keep him in the organization. They got their wish. Canó signed a Minor League deal with the Padres on Friday and will join the team's Triple-A affiliate in El Paso.

If you're a Mets fan, you love this story in the Post today. If you're not...

The Mets’ most lethal weapon is not one of their two Hall of Fame arms, or the lumber carried to the plate by any of their hitters. Steve Cohen’s bank account makes the Mets most dangerous, and gives their fans reason to believe the team’s revival will not prove to be yet another cruel practical joke.

Faced with a roster cutdown deadline Monday, and with a chance to shovel another pile of dirt on top of the Wilpon Era, Cohen did the right thing by eating the nearly $40 million owed Robinson Cano rather than protecting his bottom line at the expense of, say, Dominic Smith, who is more useful and 13 years younger than the diminished and disgraced eight-time All-Star.

In Cohen’s world, there is no alternative to the right baseball decision.

It should be noted this move came one day after the Mets’ $341 million shortstop, Francisco Lindor, publicly asked the man who paid him to spare Cano the indignity of an in-season firing.

“I wouldn’t be happy,” Lindor said. “I don’t want to see that happen. He’s a good teammate, a good person and obviously he’s got a great track record and we all know what he’s capable of doing. I don’t care how old he is, the mind is still fresh and he can still hit.”

Cohen absorbed that plea, and then did what he thought was best, anyway. If this were the Brooklyn Nets, and Kevin Durant had called for Robinson Cano the shooting guard to remain gainfully employed, Nets owner Joe Tsai would have given him a three-year extension.

But as much as Cohen is willing to pay and overpay for superstar talent, he is not willing to surrender personnel control in a culture of appeasement. So he bankrolled the decision made by Eppler and manager Buck Showalter — and relayed by both to Cano in Showalter’s office after Sunday night’s game — to give the Mets their best chance to keep rolling.

He used his billions to burn millions on the player least likely to help his team win the National League East.

“I couldn’t ask for better support than Steve’s given us,” Showalter said before serving his absurd one-game suspension during Monday night’s 5-2 series-opening loss to the defending champs.

“He’s been a rock for us. … Everything with Steve has been about baseball, and about what’s best for the team and the fans and the organization. … He’s eliminated a lot of excuses.”

He’s also enhanced morale inside a franchise that has rarely led the league in self-esteem.

Lindor said he was sad to see Cano go. “But at the end of the day,” he added, “I’m with the New York Mets and I respect the decision they made.” Good for him.

Showalter clearly saw that the aging, slowing Cano wasn’t a fit for his program. On one hand, it made perfect sense to cut an inflexible player who will turn 40 before the end of a World Series the Mets hope to participate in.

On the other hand, Cohen could have told his manager that enough is enough. He could have maintained that with a payroll already within striking distance of $300 million, he didn’t feel like throwing away tens of millions more when he didn’t need to.

Cohen could have asked Showalter, “Are you really telling me to spend nearly $40 million for the right to keep Travis Jankowski?” Or he could have asked the manager, “Are you saying we can’t win the division with Cano on the roster instead of Smith or J.D. Davis or Luis Guillorme?” 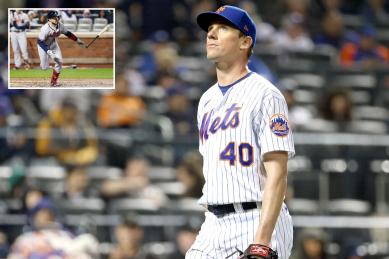 Instead the owner did something his predecessor, Fred Wilpon, never would have considered. If the Wilpon Mets faced this decision, there’s no doubt Robinson Cano would still be a Met today. Fred and son, Jeff, would have explained that the staggering financial commitments to the likes of Lindor and Max Scherzer made it impossible to take what they deemed an unnecessary hit.

Of course, the Wilpons never would have signed Lindor and Scherzer for crazy money in the first place.

But Cohen did give the shortstop that $341 million, and did give Scherzer $43.3 million a pop, because the hedge-fund baron wants to win more than he wants to make money in his secondary business. Cohen has exactly what Mets fans have craved from ownership for decades — George Steinbrenner’s stomach for the fight.

Scherzer $43.3 million a pop, because the hedge-fund baron wants to win more than he wants to make money in his secondary business. Cohen has exactly what Mets fans have craved from ownership for decades — George Steinbrenner’s stomach for the fight.

That doesn’t mean New York should throw him a ticker-tape parade. Cohen is worth $17.4 billion, according to Forbes. Though the Los Angeles Clippers’ Steve Ballmer ($91.4 billion) is in a league of his own when it comes to American sports, Cohen is richer than any MLB or NFL owner. The numbers say he is worth about 34 John Maras.

In other words, he probably shouldn’t get any extra credit for showing no payroll constraint and spending whatever it takes to deliver his fan base a winner. If Cohen didn’t use his built-in advantage to the nth degree, that would be the bigger story.

Instead he sent a message that the Mets will field the best 26 players they can find, no strings attached. That’s not worthy of a parade. Just a few bottles of the most expensive champagne.

"Given the right situation, he can still make a meaningful contribution for a team," Van Wagenen told the newspaper.

So. Many. PED jokes. And GM jokes.

Big day for cuts since the rosters have to go down to 26 today.

A few of our shiny objects will get cut along with people like this.

Dickerson got sent down by the Braves the other day to get PT at AAA, but others like Cano won't go, of course.

WASHINGTON — Robinson Cano had more than a year to work on his bunting.

Whether or not that’s truly something he practiced during his season-long suspension, it sure looked that way Thursday when Cano smoothly dropped down a shift-beating running bunt that started a tiebreaking two-run rally to fuel the Mets’ 5-1 victory against the Nationals.

“One of the biggest parts of the game was Robby’s leadoff bunt,” manager Buck Showalter said. “Isn’t it funny how good things seem to follow things like that?”

Cano (back) was mentioned as a player who could be a big addition to the Mets' offense this season by general manager Billy Eppler, Deesha Thosar of The New York Daily News reports.

ROTOWIRE RECOMMENDS: The veteran second baseman's return after missing the entire 2021 season due to a PED suspension was cited as a reason why Eppler didn't expect to make any other significant additions before Opening Day. "I'd be fairly surprised if we went after another bat or anything like that at this juncture," Eppler said Monday. "With [Mark] Canha and Escobar and [Starling] Marte, additions kind of supplemented our offense as it was. And then getting Robbie Cano back, we expect guys to be a little closer to their career numbers and their career standards of performance. I feel pretty good about where that sits right now."