I was previously unfamiliar with "the entrance trumpets" ... what a SHOW!

Seven Braves up and six Braves down, courtesy of Edwin Diaz. Six outs from the world’s best closer on a night when the Mets showed power and poise and everything a team would want to show at the start of a five-game series with an oppressive rival.

Diaz has grown into a terrifying force of nature, a harder-throwing Mo Rivera. What odds would you have gotten on that in Vegas a few years ago?

So yes, Buck Showalter went for the summertime kill against Atlanta on Thursday night, asking Diaz to do something managers only ask closers to do in October. Showalter once had his Yankees starter, David Cone, throw 147 pitches in a sudden-death playoff game in Seattle. That was really pushing it.

This was kinda pushing it too, in the 105th game of the year. But these were the Braves, the franchise that has owned the Mets and the National League East for so long. Showalter felt the heartbeat of the game and, after Adam Ottavino barely survived the seventh, understood he had no other bullpen arm worthy of the moment.

The Mets’ manager made the right call. Diaz hadn’t appeared since Friday, and interrupted his five days off only to throw 14 or 15 bullpen pitches Tuesday. This game felt bigger than the calendar suggested, the Yankees had the night off and the whole city was watching to see if the Mets could land a first-round haymaker against the defending world champs.

Nobody was expecting that on this sweltering night inside Citi Field. When the closer emerged from the bullpen door to start the eighth, his trademark trumpets were as silent as a church at midnight. 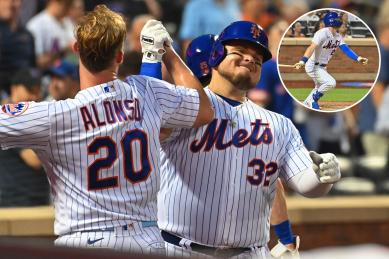 “They were doing maybe a promo or something,” Diaz said through a laugh.

First reader response to Jon Heyman in the Post (under Mancini):

I can't imagine why a team leading the league in runs scored would be looking at anything other than bullpen help. There's not a reliable arm out there. (Three good months by Diaz has not redeemed him in my mind.) Go fill up the bullpen and I'll be happy to stick with the bats we have.

Little bro Alexis is climbing the ranks in the Reds pen.

Rotowire's depth chart for the Mets: