There were still six outs left. Gerrit Cole had gotten the Yankees this far. He’d mostly been the equal of his status as ace of the staff, leading with his heart and his fastball across seven innings and 110 pitches. He’d gotten 21 Cleveland Guardians out. The Yankees led, 4-2. Six outs to The Bronx.

But Cole was cooked. He wasn’t going to get them. The Yankees had to get to 27 outs, one night after they stalled at 26, one night after the bullpen door — and who was available behind it — became a most improbable focal point of this American League Division Series.

One night after the Guardians had pinned the Yankees’ backs to the cold wall of winter.

This time, the bullpen door at Progressive Field opened, and out trotted Clay Holmes. On Saturday, Yankees manager Aaron Boone had declared him unavailable “unless there was an emergency.” This was news to Holmes, according to Holmes. There was some he-said/he-said. There was some pregame explaining.

“We had a good conversation about the situation last night,” Holmes said.

“I think we’re on the same page with it,” Boone said.

So here was Holmes, unwitting face of the Yankees’ most critical crisis of the year, working the bottom of the eighth. With one out, he walked Steven Kwan, unsurprising because Kwan has been a pest to everybody in this series. There were 36,728 people inside the ballpark, and they sensed a Moment. They rose to their feet. They roared.

Saturday, they’d seen their Guardians do something that hadn’t happened in the 167 previous times the Yankees had entered a postseason ninth inning with a multiple-run lead: They’d come back. They’d won the game. They stunned the Yankees. They probably even shocked themselves. 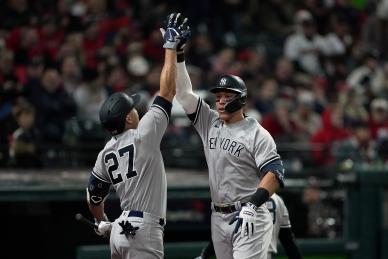 MLB could certainly use marquee team in Yankees advancing to ALCS

But they didn’t face Holmes on Saturday, and even as Holmes had his issues in the second half of the season, he remains the Yankees best back-end bullpen option. Now, he had to prove it.

He struck out Amed Rosario. He struck out Jose Ramirez. He threw 17 pitches, and his sinker had its sink and he looked the picture of health. In the space of two hitters, he kicked a plug out of the wall at Progressive Field and helped steer the Guardians toward midnight and this series toward The Bronx.

“I thought he threw the ball very well,” Boone said.

“I felt good,” Holmes said. “I felt more than capable of doing my job.”

“We’ll see what we have tomorrow,” Boone said.

CLEVELAND — At the most critical moment of this Yankees season, the only thing Clay Holmes threw Saturday night was his manager under the bus.

Aaron Boone said his closer was “capable” of pitching in Game 4. But “I felt like he was in jeopardy” if the righty was used for the second straight day and third time in four days after enduring a shoulder strain late in the season.

Holmes said he never conveyed that he was not available to his manager or anyone else with the Yankees. Instead, he explained multiple times that he “woke up [Saturday]” prepared to pitch and “I was ready to go and pitch if needed.”

He was needed. The pivotal Game 3 of this Division Series was slip, slip, slipping away under the unrelenting offensive jabs of the Guardians. But instead of Holmes — who never even warmed up in this game — Boone stretched Wandy Peralta to a third inning after the lefty had retired the last batter of the seventh and gone 1-2-3 in the eighth.

But a couple of hits off Peralta led Boone to turn to Clarke Schmidt, who — at best — straddles the line of the Yankee manager’s circle of bullpen trust. The Yankees began the ninth with a 5-3 lead. They lost 6-5. The Guardians lead two games to one and Gerrit Cole might have to pitch a complete game Sunday night in Game 4 to save a threadbare bullpen and rescue this Yankee season.

“It stings right now, and it’s raw,” Boone said. “You’re frustrated because you’re so close to the end there, but we have got to turn the page. It’s not allowed to be the case [to wallow]. We have got Gerrit going [Sunday] We expect to come out here and win.”

The Yankees had been 167-0 in the postseason in their history when leading by multiple runs entering the ninth inning. This fall to 167-1 was months in the making, though. When Chad Green and then Michael King were lost for the season. Zack Britton never made it fully back. Aroldis Chapman lost his confidence and then went AWOL, banishing himself from the team. Scott Effross and Ron Marinaccio endured late injuries that made them like Green and King — valuable pieces now out. 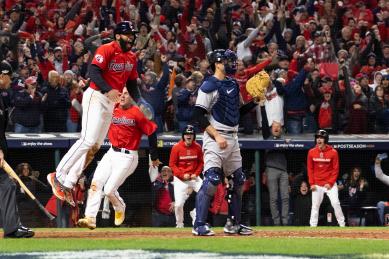 Yankees’ haymakers not enough vs. the Guardians’ jab-jab style

Boone was left with Holmes, Peralta, Jonathan Loaisiga and Lou Trivino in his trusted group — and Holmes and Peralta only made it back from injury at the conclusion of the regular season. All but Trivino pitched in a winning Game 1 on Tuesday. All four pitched in a 10-inning loss Friday. All but Holmes pitched in Saturday’s “gut-wrenching” (Boone’s words) loss.

August 13, 2022
New York Yankees – The entire Yankees team has struggled as of late, but maybe nobody more than Clay Holmes. Holmes was brought in to protect a one-run lead in the 9th yesterday. He got 1 quick out before walking the next two batters and giving up the tying single before getting pulled for Wandy Peralta. The Yankees would go on to lose in extra innings. Holmes has now given up runs in 4 of his last 5 appearances, including 3 blown saves. Command seems to be the source of his trouble, as he has issued the same number of walks in his last 10 appearances as he has for the rest of the season (39 apps). Meanwhile, Aroldis Chapman pitched a clean 8th ahead of Holmes, and now has 8 straight scoreless appearances. It’s a bit too early to make a change here, but Holmes is certainly on a hot seat now, and with Chapman and Peralta continuing to pitch well, Holmes may not have many chances left.

Yeah I have him too in a CBS league. No win for Holmes there. I just don't understand why the scorer is able to pick who gets the win. It's not like the Yanks were ahead the whole game and the starter didn't go 5, and the scorer picks the most effective reliever.

If someone sees an explanation of this, please share.

That's what MLB now shows, and it's crazy. Win for Peralta. For teams using Onroto, it still shows Holmes w the win, Peralta a save. Hope that's the final decision. I own Holmes.

So did Holmes get the Win last night or not? He came on in the bottom of the 8th with the Yanks ahead 2-0, allowing Cole's runner to score and then 1 of his own to score to tie it up at 2. Holmes pitched 2/3 of an inning, 1ER allowed. The Yankees got 2 in the top of the 9th to go up 4-2 and then Peralta closed it out with a scoreless 9th.

You would think that's a Win for Holmes and a Save for Peralta, but I'm seeing just a Win for Peralta. Was the official scorer that upset that Holmes blew Cole's Win? Relievers blow saves all the time and still get the Win...not sure what's going on here.

New York Yankees — Bullpen hierarchies change fast, and Aaron Boone has quickly found that his most trusted late-inning relievers ahead of Aroldis Chapman are 29-year-old sinkerballer Clay Holmes and crafty long man Michael King. Boone’s turn to Holmes last night for a vulture save with Chapman resting means a promotion to first in line.