It certainly sounds like it wasn't a wasted summer for Rutschman. The report card from Baseball America:

The Orioles included 55 players in their instructional league, which began Oct. 5 in Sarasota, Fla. The roster was highlighted by 15 of the team’s Top 30 Prospects. Among the group who made the cut was catcher Adley Rutschman (No. 1), righthander Grayson Rodriguez (No. 2) and lefthander DL Hall (No. 3).

The majority of the players on the roster did not spend time at the alternate site, excluding Rutschman, Hall, Rodriguez and shortstops Gunnar Henderson and Terrin Vavra—all of whom were late additions at the site.

The only surprising omission was outfielder Heston Kjerstad, the No. 2 selection in the June draft. Orioles general manager Mike Elias told the Baltimore Sun Kjerstad is absent because of an "undisclosed medical, non-sports related reason."

The start of the Major League Baseball season is just under two weeks away, which means summer camp is in full swing. That means there is plenty of time for prospects to compete in intrasquad and exhibition games. Each day during the week we will be providing a roundup from summer camp that includes highlights, debuts of 2020 draftees and more.

—The Orioles added a quintet of players to their 60-man player pool Friday, headlined by 2019 No. 1 overall pick Adley Rutschman. Rustchman, the No. 5 prospect in baseball, was previously the lone Top 10 prospect in the Top 100 not to be in a player pool. Rutschman Saturday quickly made an impact in the team’s intrasquad game, drawing a walk against righthander Hunter Harvey, moving from first to third on a single and later scoring on a Rio Ruiz three-run home run.

—The Orioles also added to the player pool lefthander Keegan Akin (No. 9) and righthanders Michael Baumann (No. 10)—the Orioles’ co-minor league pitcher of the year in 2019—and Isaac Mattson.

Peter Gammons at The Athletic:

“This is not a game where you can read an exit velocity and pitch velocity and declare someone a major leaguer,” says one American League GM. “Young players have to play. Position players need reps and defensive and baserunning situations and reps. Pitchers need innings, and in many cases, trials in different roles followed by the learning process of repeating success. That doesn’t happen on laptops.” 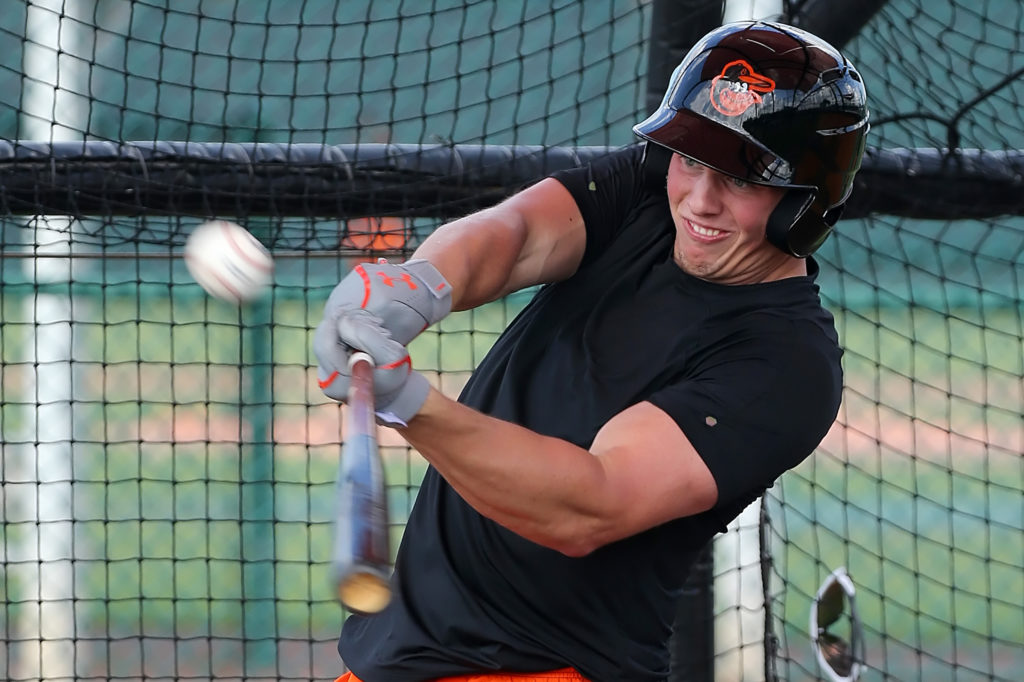 Adley Rutschman was the overall No. 1 pick by the Orioles in the 2019 draft. (Cliff Welch / Icon Sportswire via Getty Images)

Look back at last June’s draft. Orioles catcher Adley Rutschman, Kansas City shortstop Bobby Witt Jr., White Sox first baseman Andrew Vaughn, Marlins outfielder JJ Bleday and Tigers outfielder Riley Greene may all be stars someday, but the 2020 season is extremely important to their development. Witt and Greene need their first full professional season. Rutschman, Vaughn and Bleday need a full year to see how close they can climb to the big leagues. “A lot of general managers talk with one another all the time about ways to try to replicate the minor-league experience,” says another National League GM. With clearance or testing similar to what MLB is now experimenting with, those under age 20 could potentially be sent to the Dominican Summer League, and perhaps by late June they could begin the Florida and Arizona rookie extended spring, Gulf Coast and Arizona Rookie leagues.