FWIW, he's also first in Runs, even though Runs is the great equalizer. That said, his average will be worth more when all is said and done. Averages are awful this year compared to nearly every year, including last.  I'm not sure how total league runs and HR are this year compared to last.

View All of Yesterday's Batters at Baseball-Reference.com

Take it away, Greg Joyce:

If there used to be a book on how to pitch Aaron Judge — a breaking ball was once a good bet, especially a slider — the Yankees slugger has ripped all of the pages out of it this year on the way to an historic season.

The record book could be the next one to need some fixing.

In his sixth full season in the big leagues, Judge has patched up most of the holes that may have existed during his first five — which were mostly strong years in their own right and yet have been easily surpassed by the outfielder’s prolific 2022.

“It used to be a power hitter that had to get a mistake,” Yankees hitting coach Dillon Lawson said this week in Boston. “So [pitchers] had to worry about, ‘If I execute this pitch, I got a chance. If I miss by one or two baseballs, he’s gonna get me.’ Now, he can camp out in his damage zone or he might be able to go into your area of strength as a pitcher and take your strength away. That’s really opened a lot of things up because then you’re talking about the cat-and-mouse game.

“He’s been the cat for most of the year.” 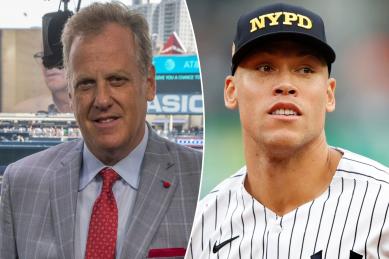 Entering the series that begins Friday in Milwaukee, Judge is batting .310 with 57 home runs, 123 RBIs and a 1.102 OPS. He is closing in on Roger Maris’ American League and franchise record of 61 home runs and has suddenly given himself a shot at chasing the AL Triple Crown as well (Judge has huge leads in HRs and RBIs and entered Thursday fourth in batting average, with the Twins’ Luis Arraez leading at .320). In a year when offense is down across baseball, Judge has only thrived more.

A number of factors have allowed Judge to take that next step in his game this season, but chief among them are being in a good spot physically throughout the year, using his experience to his advantage and becoming one of MLB’s most dangerous hitters against sliders.

Judge has always mashed fastballs during his big league career, and this season is no exception: he’s batting .340 with 32 home runs and a .760 slugging percentage against them, according to Baseball Savant.

“A fastball was something he was always able to get on,” Red Sox veteran lefty Rich Hill said. “But the breaking ball has been a huge adjustment for him to be able to really start to see a complete hitter.”

Judge has attacked his potential weakness against sliders in part by putting in purposeful pregame work, including against a slider pitching machine to prepare his eyes for what he might see on a given night.

Judge has also worked to refine his bat path in a way that allows him to handle more pitch types by keeping his swing through more of the strike zone and for longer.

“That requires being able to first of all recognize the pitch, which he’s great at,” Lawson said. “But then having a bat path that allows you to handle the multiple pitch types that you are recognizing and you are recognizing for strikes. I think that’s probably what you see in the batting average and in being able to handle sliders and other pitches. Different locations as well. That’s due to his dedicated work on bat path.” 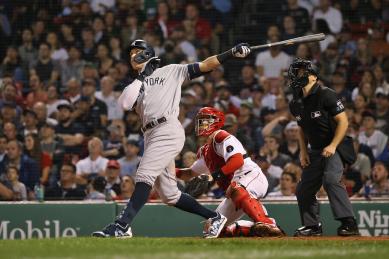 That ability to do damage against breaking pitches was on full display Tuesday night at Fenway Park.

Judge’s 56th home run — his first of two homers Tuesday — came against a Nick Pivetta knuckle-curveball in the sixth inning. It was his sixth home run on a curveball this season — a marked improvement from the five homers he hit off curveballs from 2019-2021 (spanning 278 games).

Home run No. 57 came off of Garrett Whitlock’s slider in the eighth inning — the 14th slider that Judge has hit for a homer this season.

“It’s tough because there’s not one pitch that’s guaranteed to get him out every time,” catcher Kyle Higashioka said. “It’s like, you make one mistake and he’s going to crush it.”

Of course, with the way he can cover the plate and different pitch types, it doesn’t even take a mistake for Judge to pounce these days.

“He’s got coverage inside, he’s got way more coverage than you would think outside,” said Higashioka, who first played with Judge in 2014. “He has a contact-hitter’s approach in terms of he’s just looking to square the ball up. He’s not looking to hit homers, but he’s so strong that when he squares it up, half the time, it’s a homer. That’s just what makes him such a tough out.” 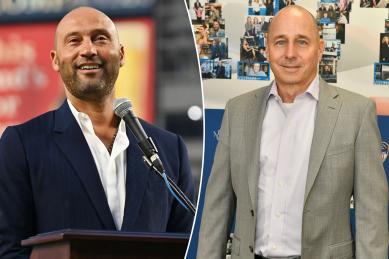 “There’s a handful of them out there,” Cole said. “What’s elevating [Judge] among the rest of the group is the consistency.”

While Judge has consistently downplayed his home run chase, he seems to take pride in also hitting for a high average.

“As a kid, you looked up and you see Albert Pujols hitting .330 every year and consistently putting up the RBI numbers and stuff like that,” Judge said. “So for me, grading the hitter’s always been about average. It might be a little old school, but can you hit or can you hit? It’s always been a goal of mine to try to get to that point [.300] and do that.”

Judge was putting together this kind of season through the first half of his rookie year in 2017, when he entered the All-Star break batting .329 with 30 home runs and a 1.139 OPS. But the league adjusted to him in the second half, cooling him off as he finished with a .284 batting average, 52 home runs and a 1.049 OPS.

This year, Judge has only gotten stronger down the stretch. Over his last 50 games since the All-Star break, he is batting .360 with 24 home runs and a 1.321 OPS. Even when he is not going deep, he is getting on base and being a productive hitter — all while remaining physically fresh despite playing more center field than the Yankees would necessarily like....

There's more but that's enough for me today.acebook

A mere two knocks last night -- only one for extra bases, only one extra base at that. No ribbies, no SB... he's a slacker.

For some reason we don't get the stat feed until the very end of each day. Judge now shows 16 SB. A mere two CS. As I said, he's a slacker.

I never considered for a moment that ARod has the modern-era* AL HR record. I never would have thought that. I probably would have said Griffey. But, I forgot that nobody in the AL even hit 50 for so long after Maris. Maybe Cecil Fielder was the first to reach that figure again in 1990.

I guess Maris could be considered Modern-Era considering that the Red Sox integrated in 1959. But, it was still a 16 team league back then, so it wasn't too moderns. Modernity has to begin with 26 teams IMO.

In the second game of the double header he had five true outcomes -- three of them positive -- but no homers.

Aaron Judge continued his climb up the single-season home run leaderboard with his 55th home run of the year yesterday. Judge is six homers away from tying Roger Maris' American League home run record of 61.