One of the many players who's stats in a 60-game season have to be tossed out the window. Because of that season, you can get him for a buck or two.

Results stats seriously better. His HardHit% ranks 358th among the 362 batters who had at least 200 plate appearances. As we wait out the lockout, he's at the top of the A's depth chart at second base.

Lowest HardHit% of all batters with 200+ PA.

His 71 OPS+ might have been the lowest. His career OPS+ is 76 and before he's 30 he has seven years towards his pension.

The next stuff from Rob Rains at BP could have been posted under Harold Castro or Matt Chapman, but hiding it here makes their charts, uh, better.

Batting Records Not As Galore As They Seem!

OK, I was a little disingenuous with a lot of those graphs. I excluded 2020. There are really good reasons to do so: Pitchers didn’t bat, teams played only nine opponents in the regular season, preseason training was irregular, and, of course, there were only 60 games. In general, I’m in favor of ignoring all aspects of 2020 except the postseason. But if you’re a stickler...

We didn’t set a record for strikeout percentage, despite the universal DH in 2020. 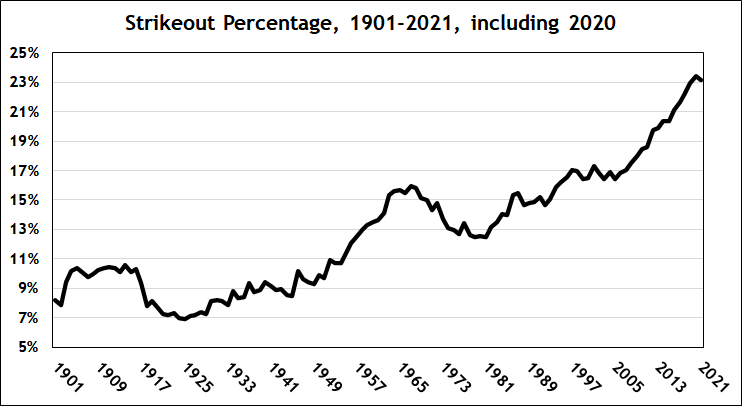 No new record for fewest balls in play, either. 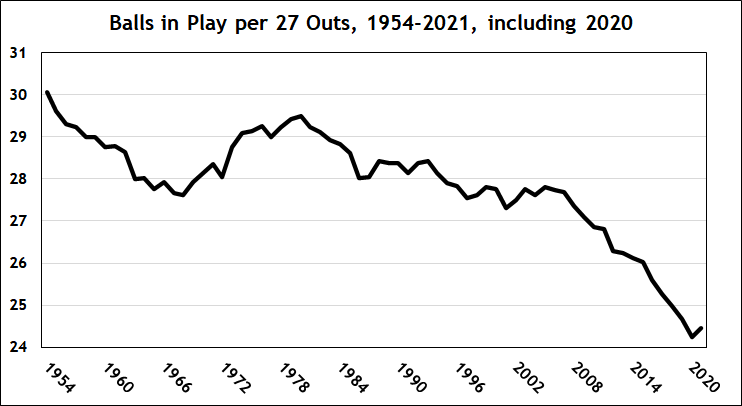 Those wild pitch and stolen base percentage records are good, though.

The xSB formula (starting on p. 31) attempts to quantify Skill and Will, based on how fast the player is, how often he tries to steal and so forth. Clearly the Forecaster thinks Fraley is very fast.

Actually, in limited playing time, Fraley showed that he was very willing to swipe a base and he had great success.

So did a lot of players. Have success, that is. The Will was as low as it's been in the last half-century.

Here’s one way in which the game was arguably more exciting. 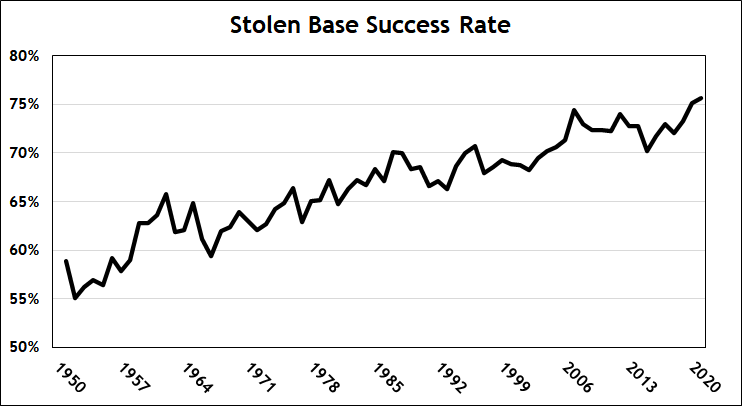 Granted, there weren’t a lot of stolen base attempts. There were 0.61 attempts per team per 27 outs, the fewest since 1964. But we’re not in record territory. (That would be 1953, 0.49 per team per 27 outs.) The success rate was, thanks to the efficiency of modern baserunning.

With such a low LD% and high SO%, I'm surprised his xBA isn't lower.

Right down to Launch Angle and Pull%, Chapman is the poster boy of the modern-day hitter. Rob Mains shows what it all adds up to in an article today:

The addition of extra-inning zombie runners and seven-inning doubleheaders have made per-game figures unreliable for the past two years. As I’ve written, we’ve redefined what constitutes a game the past two years. So for the next graph, I’m using a per-27-outs measure. 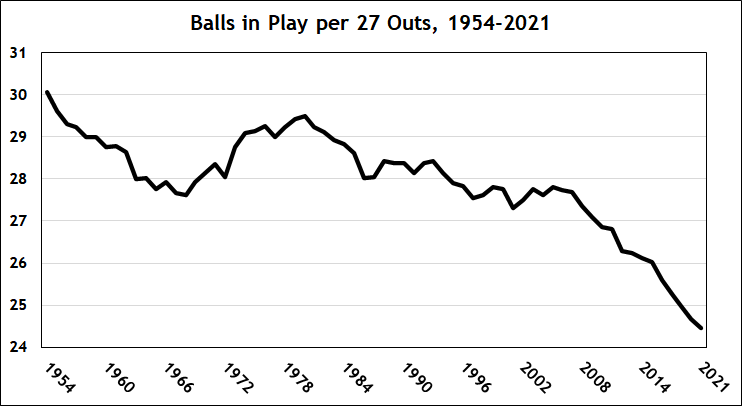 Take at bats, subtract strikeouts and homers, and add sacrifice hits and sacrifice flies, and you’ve got balls in play. But in 2021 baseball, you had fewer than ever.

Of all hitters who went to the plate at least 200 times last year, Harold has the highest LD%. He had a lower than average K rate, so it's a little surprising Statcast doesn't give him a higher xBA.

The fact that his K rate was slightly better than average might be the bigger point. 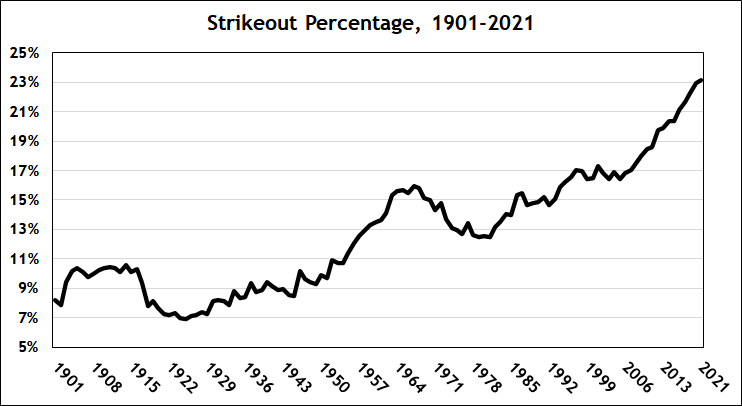 Batters struck out in over 23 percent of plate appearances in 2021. That’s never happened before.

I bought Donaldson for $18 last year, and I agree with your injury risk assessment, Alex. He got hurt on his first AB, and I was on pins and needles with him the whole year. He had several injuries, despite the Twins babying him at every turn. It really was a miracle that he played as many games as he did. He's a fine player - still - when he plays, but I can tell you from experience that he's hard to trade due to the injury perception. So if you buy Josh, be prepared to sweat out every sprint on the bases for the entire year.

My biggest concern here is that Showwalter's 2018 Orioles were slightly below league average for SB, but they did have a high SB steal percentage. So maybe he let's Marte run?

It's not clear, looking at his Statcast stats, why Statcast thinks his actual batting average and slugging average were higher than they should have been. Only 17 hitters with 200+ PA had a higher HardHit%.

Could be that so many of his hard-hit balls were grounders. There's no question, based on his BABIP, that a lot of his grounders eluded infielders.

In the HardHit% rankings, he's No. 17 among all hitters with at least 200 plate appearances. His EV ties for third highest (with Evan Longoria), his Barrel% ties for 13th (with Mitch Garver). Hence the high expectations.

I have to admit I'm one of the people Mike G is referring to in his pick for the Guide. Even now I worry about Donaldson calf injury. Or, if not that, something else is going to put him on the shelf.

But I agree with Mike, and Statcast, that he should not be underestimated.

It's interesting, quite unusual, that his xBA is higher than his actual BA, his xSA is lower.

After the season, he again went under the knife to take care of his right knee.

Tied for 14th highest HardHit% among all hitters with at least 200 plate appearances; all but two (Byron Buxton and Mitch Garver) have higher average velos.

Somewhat paradoxically, the Bill James Handbook estimates he would have hit 42 homers, all things being equal.

The Handbook predicts he'll have 36 xHR this year and actually hit 31.

Tied with two others for the 14th highest HardHit% among all hitters with at least 200 plate appearances.

The fact that he only had 254 is the Byron Buxton story.

Among all hitters with at least 200 PA, his HardHit% ranks a surprisingly low 13th.

Only two batters, Giancarlo Stanton and Manny Machado, had a higher maxEV last year; it's surprising anyone did.

The only one with a higher Barrel% was Mike Zunino (24).

When the ball left his bat, it averaged 94 mph,

When the ball left his hand (throwing a fastball), it averaged two mph faster.

12th highest HardHit% among all hitters with at least 200 plat appearances. Probably why his expected slugging average is a little higher.

His expected batting average might be a little lower -- a hair lower -- because of the high BABIP.

But let's not split hairs: Garver seems primed for a good season. Possibly very good. After missing virtually all of June and most of July, he pounded out twelve homers in July, August and September.

Benchmarks, by the way, has the averages for all the Statcast metrics that kick off the player pages.

I am eliminating the surfeit of scans as they come to light in various comments.

Marte's HardHit%, Statcast version, is the same as the average of all players last year with at least 200 plate appearances. His average exit velocity is below average.

Maybe that's why he gets five pans and nary a pick in the forthcoming Guide.

One example (one of the shorter ones)

LEIBOWITZ PAN: Mets paying long-term for
a career year they will likely never see repeat.
Home run output has stabilized in the low

to mid-teen HR/FB level. BABIP was out of
context with career and will decline.

The Forecaster pans him big-time, calling him the biggest SB Overperformer in baseball in 2021.

Even Statcast pans him:

To which the market is going to say phooey in auctions this April, as well it should.

In his age 27 season, it's going to be very hard for him to have career year. But all the tea leaves point to a great year.

Click on the name of a player (or thread) to go directly to that page and see the comment in context with the other comments.